Blue states will lose millions of people in the years to come—and they aren’t ready.

By
Arthur B. Laffer and


As the Trump tax cut was being debated in December, California’s Gov. Jerry Brown called the bill “evil in the extreme” and fumed that it would “divide the hell out of us.” He’s right—but in the end, this change could be good for all the states.
In the years to come, millions of people, thousands of businesses, and tens of billions of dollars of net income will flee high-tax blue states for low-tax red states. This migration has been happening for years. But the Trump tax bill’s cap on the deduction for state and local taxes, or SALT, will accelerate the pace. The losers will be most of the Northeast, along with California. The winners are likely to be states like Arizona, Nevada, Tennessee, Texas and Utah.

For years blue states have exported a third or more of their tax burden to residents of other states. In places like California, where the top income-tax rate exceeds 13%, that tax could be deducted on a federal return. Now that deduction for state and local taxes will be capped at $10,000 per family.
Consider what this means if you’re a high-income earner in Silicon Valley or Hollywood. The top tax rate that you actually pay just jumped from about 8.5% to 13%. Similar figures hold if you live in Manhattan, once New York City’s income tax is factored in. If you earn $10 million or more, your taxes might increase a whopping 50%.
About 90% of taxpayers are unaffected by the change. But high earners in places with hefty income taxes—not just California and New York, but also Minnesota and New Jersey—will bear more of the true cost of their state government. Also in big trouble are Connecticut and Illinois, where the overall state and local tax burden (especially property taxes) is so onerous that high-income residents will feel the burn now that they can’t deduct these costs on their federal returns. On the other side are nine states—including Florida, Nevada, Texas and Washington—that impose no tax at all on earned income. 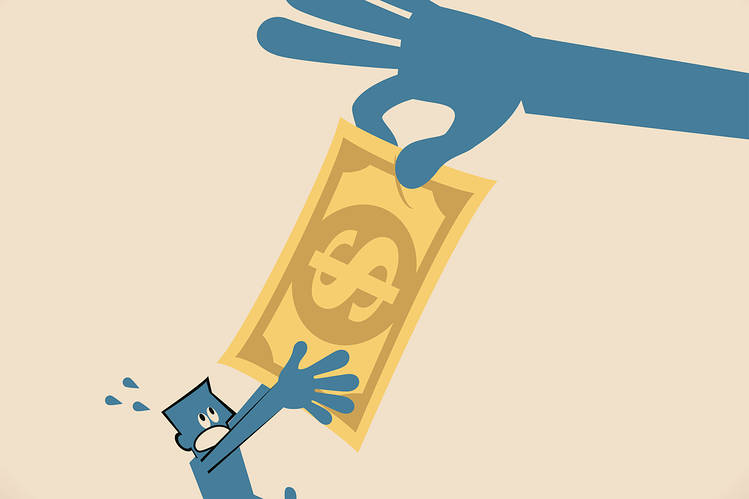 
Last week the two of us, along with co-author Jonathan Williams, released the 11th annual edition of “Rich States, Poor States,” a report published by the American Legislative Exchange Council. The report ranks each state’s economic outlook using a range of variables. One is domestic migration: Are the U-Haul trucks and vans moving people in, or moving them out? Over the past decade, about 3.5 million Americans on net have relocated from the highest-tax states to the lowest-tax ones.

Since 2007 Texas and Florida (with no income tax) have gained 1.4 million and 850,000 residents, respectively, from other states. California and New York have jointly lost more than 2.2 million residents. Our analysis of IRS data on tax returns shows that in the past three years alone, Texas and Florida have gained a net $50 billion in income and purchasing power from other states, while California and New York have surrendered a net $23 billion.
Now that the SALT subsidy is gone, how bad will it get for high-tax blue states? Very bad. We estimate, based on the historical relationship between tax rates and migration patterns, that the pace of out-migration from California and New York will soon double—with about 800,000 net out-migrants each of the next three years. Our calculations suggest that Connecticut, New Jersey and Minnesota combined will hemorrhage another roughly 500,000 people in the same period.
Red states ought to brace themselves: The Yankees are coming, and they are bringing their money with them. Meanwhile, the exodus could puncture large and unexpected holes in blue-state budgets. Lawmakers in Hartford and Trenton have gotten a small taste of this in recent years as billionaire financiers have flown the coop and relocated to Florida. As the migration speeds up, it will raise real-estate values in low-tax states and hurt them in high-tax states.
As far as we can see, the only way for blue states to prevent this coming fiscal bloodbath is to start taking tax competitiveness seriously—and to cut their tax rates in response. Progressives should do the math: A 13% tax rate generates zero revenue from someone who leaves the state for friendlier climes.
Blue states ought to be able to lower their taxes and spending dramatically without jeopardizing vital services. Despite its shrinking tax base, New York spends nearly twice as much on state and local government per person ($16,000) as does economically booming Tennessee ($9,000).
Alas, delusional liberal interest groups want blue states to respond to the Trump tax cuts by soaking their rich residents even more. If that happens, our best advice to blue-state residents is simple: Git while the gittin’s good.
Mr. Laffer is chairman of Laffer Associates. Mr. Moore is a senior fellow at the Heritage Foundation. They are co-authors of the ALEC annual report “Rich States, Poor States.”

My style is impetuous, my defenses impregnable.

It's not going to change. In fact, it's going to accelerate. The mega rich (billionaires), of which there are very few, are mostly non-residents of California. The super rich (multi-millionaires), for the most part, are willing to bite the pillow because they love what they have to offer. They can take a 10% hit to their income and it won't affect them badly. My clients tell me all the time, "I don't like it but it's the price I pay for living on the sand in Manhattan Beach." The middle income class is the group that I see fleeing the fastest and in the greatest volume. They are the group that is paying their "fair share" and more. As the middle income class leaves there will be greater pressure on those remaining. As the lower income class (read: democrats) population grows the liberal agenda will only tighten its grip on the throat of taxpayers. You think it's bad? You're going to look back on this as "the good ol' days"...

One of my old professors at USC.

I don't think the mortgage interest deduction limit bite will be that big. It only affects the deductability of interest for amount of a mortgage over $750,000. In CA there are not all that many mortgages over $750K and the loss of the interest deduction on that portion over $750K will not be that great for folks who can shell out $5K a month or more for P.I.T.I. It will likely moderate price growth in housing, particularly as interest rates increase. That may cause some exits and also slow down move-ups. (UHaul cost from CA to Georgia currently $499. Cost from Georgia to CA? $109)

The hurt is going to come from bumping up against the $10K deduction limit on property taxes and our high state income tax rates. The State Goobermint is going on a diet whether they like it or not - but they will try to stick it to us with every other kind of tax and 'fee" they can think of.

Hogskin is right about the high rollers. Some of my very high earning friends (mostly still liberal for some inexplicable reason) are maxed out on marginal tax rates and and live in very expensive homes. None of them plans on leaving. Most of us are looking at our home equity and disposable income and wondering about how to afford retirement. Leaving is a natural solution - and better than moving to some "affordable" craphole in CA

My style is impetuous, my defenses impregnable.

DKScott said:
The hurt is going to come from bumping up against the $10K deduction limit on property taxes and our high state income tax rates. The State Goobermint is going on a diet whether they like it or not.
Click to expand...

Scott do you think the average California shlub can connect those dots? I found with most of my clients (and these are high rollers) that they see it as a federal problem - "That damn Trump limited my state tax deduction". It takes really, and I mean REALLY, dumbing it down for a lot of them to see it's a state problem and not a federal problem. It's interesting because most of them are extremely business savvy yet unable to see the forest for the trees.

I think we the people need to take Cal back and kick these hippies out :smiley-usa-flag-raise:

OK, Mikey. When you think its time, paint your face blue, grab your rifle and run outside screaming FREEDOM!.

Then look around. If you are the only one doing it, go back inside because it isn't time yet.

As long as they don't take their CA ways, it's good...

One life don't BLOW IT!

Ike, it's already happening look at the new blue rising in TX, NM, FL, NV, AZ....little to no personal income tax....hatchet, what happened to the cow pie toss to raise money for youth football?

That went all PC...in AZ

Californians ruined Colorado. When KA fails, the Communists will blame everyone but themselves and the sheeple will continue to buy the lies.

Just as our state was ruined by New Yorker and other easterners.

Just not that many who still remember what we used to have.

I remember. Was born and raised here, with no plans to leave. Agree the CA legislature as well as many local/county governments have failed us massively. One only need to look at CALPERS and CalSTRS and some of the insane pensions the state has been handing out to teachers, cops, prison guards, etc. - typically in return for political support from the various unions. Then we, the taxpayers, are left holding the bag by lawmakers who are unable to do math or understand basic economics.

It's not just CA and NY people are fleeing from due to high taxes. The Land of Lincoln has seen an exodus that dropped their size from 5th largest state to sixth.