Theres only one gun that qualifies as the most influential auto pistol design ever developed.
For nine decades the Colt Government Model 1911 has been without a doubt the most recognized, most imitated, most influential, and most used semiauto handgun in the world.
Its basic mechanical design, based on John Brownings original 1898 patent for a recoil-operated autoloader mechanism, has been the basis of reference for virtually every other centerfire autoloading pistol subsequently produced by handgun manufacturers everywhere for the entire 20th century, and it is more widely copied and imitated than any other pistol ever made. While various rifle designs came and went, it was the official sidearm of the U.S. Armed Services for 75 yearswhich is longer than any other continuous-use military arm in any nations history.
Because of its widespread use by military forces in many nations, more people have handled or fired some form of the Model 1911 pistol at least once in their lives, than any other sidearm ever made.
Worldwide, dozens of parts assemblers and manufacturers are presently producing clones and semi-clones of the Model 1911, including at least four based in the US.
Even at the turn of 21st century, when high-tech double-action autoloaders with space-age polymer components firing high-pressure metric-designation cartridges have swept many military and law enforcement markets, the venerable all-steel Government Model single-action semi-auto in original .45 ACP chambering remains a strong seller. Demand for the Model 1911in all chamberings, all configurations, from all manufacturers and custom pistolsmithsis in fact at an all-time high.
Why has the Model 1911s position been so strong, so dominant, for so long? Simple. Its straightforward, user-friendly design cannot be outclassed for reliability, accuracy, endurance, and effectiveness. It pretty much shoots where you point it, goes bang every time you pull the trigger, and is hard to wear out.
Another strong testament to the Government Models enduring position as top gun is the fact the world of autoloader sport and competition shooting remains dominated by the classic-form Model 1911. It remains the dominant centerfire pistol used at the annual Camp Perry National Championship bullseye pistol matches, and it remains the pistol design of choice for a vast majority of USPSA/IPSC shooters. Most of the worlds top pistol competitors use the proven Model 1911.
The Government Model design is not limited to its original .45 ACP. It is also availiable in 9mm, 10mm, and .38 super.

OK, I know theres some 1911 lovers out there, so lets talk, and see some pictures.

Ahhhhhh...now you're talking my language. I have two 1911s both springfield loaded. One 45ACP and one ultra compact 9mm. I really like the Kimbers but I haven't gotten the permission to spend that kind of dough yet. The 1911 just seems to fit my style and my hand for some reason. I'm sure that you can argue that there are more reliable guns out there but for some reason the classic 1911 is the longest lasting and most coppied semi auto on the market. Just my $0.02, no gun collection is complete without a 1911 in the safe!

I bought my self a Kimber Custom II/Walnut (.45 ACP) for Christmas last year I wanted it in 10mm but it wasn't on the DOJ list. I is a real shooter in the hands of someone that can shot!

"So this dyslexic alcoholic walked into a bra.....

I'll take some pic's and post of my Colt Lightning .380. :smiley_rotflmao:

It is by far my favorite handgun that I own. I take it everywhere with me preaty much all the time. It is super light on an alloy frame with a stainless slide- super compact/concealment and fits perfect in my hand.

I stack the clip with hyrdo-shocks and semi-wad cutters in rotation. hyrdo-shock in the pipe and 7 more in the clip.

He had two of them in the store and I should of bought them both. I believe I paid $430. I have heard it is now a collectors item of some sort and is worth around $720-780.

They also had the Colt Pony that is a D.A.O. that I was gona purchase for my wife.

Now I would like to someday get the Kimber in a .45. :smiley_rotflmao:

"So this dyslexic alcoholic walked into a bra.....

Here are some pic's- I just got home, so it must be readibly available more so than a camera. :smiley_rotflmao: 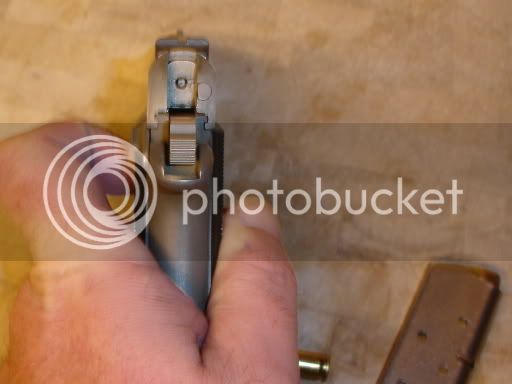