I skipped dove opener Saturday morning and decided to try and fill my deer tag. Got a late start and didn't leave the truck until just before 7:00 hadn't hunted this area before but the plan was to cross a creek and head to the head of the drainage and find a spot to spend the morning to glass from.
About a mile in I hit a small ravine about 100 yards across and 120' deep with real steep walls. It looked like it had a spring and a bit of running water in the bottom. Just as I noticed the water I caught movement about 50 yards up canyon of me and saw a nice bear cruising down in the bottom of the canyon. He didn't act like he was in a hurry but was moving at a incredible clip. I backed off the edge and hauled ass about 200 yards down to where the canyon made a 90* turn down hill. My thinking was I could get in front of him and part way down the side and catch him as he came around the corner. I get to the edge and he is already there. I made it about 20' down off the edge before he saw me.
I range him for 45 yards and by this time he knows somethings amiss As I'm nocking an arrow he takes off running up the opposite side of the canyon. He stops broadside slightly below my elevation and I re-range him at 60 on the dot, readjust my sight for 61 to account for the hard wind blowing in my face, come to full draw take a couple of breaths to calm down and check my level. The release came as a shock and watched my arrow burry right behind his shoulder. He took off back down the canyon and piled up less than 40 yards from where he was shot.
As I walked up on him I was a bit disappointed at the ground shrinkage until I realized he was wedged down between 2 large rocks. then he started looking bigger and bigger.
Now the work began, I got him quartered out and all the meat off. I took the first load out of the canyon and made a call to a buddy who said he would come down to help. I went and got the rest of the meat out of the canyon and started to the truck with the first load. My buddy showed up about when I got the first load out. I took a short break and we went back in for the rest of the meat, 2 more loads each ended up bringing out pounds of meat and 60 pounds of skull and hide.
The hide squares out at 6' 11" and I rough scored the skull this morning. It measures out at 20" so after shrinkage he should be over 19" and well over the Pope and Young min. of 18". 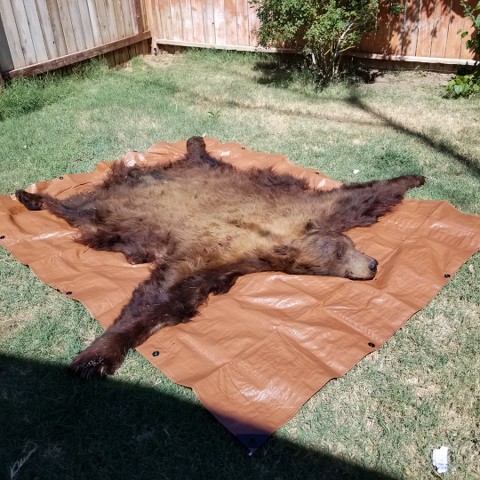 Richard... that is a bad ass bear. Great job!

Pretty color phase too. Way to beat them down with a stick and string!

that is one bad ass looking bear

Beauty of a bear but don't tell hatchet you skipped dove!!!